Home > An Entertainment Guide > Games to Play at a Dinner Party

Games to Play at a Dinner Party 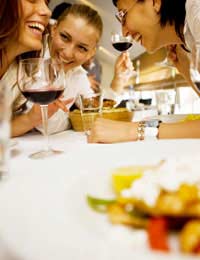 The dinner party has been an enjoyable, sophisticated event for hundreds of years and with good food and stimulating conversation the occasion should be a complete success. However, many people have experienced dull dinner parties that lack any interaction, with the only sound coming from the guests mouths while they chew their food vigorously.

If you believe your dinner party could become one of these uncomfortable experiences then you could incorporate a few fun games to spice up the mood.These games are good for groups of people who do not know each other very well or for guests who need coaxing out of their shells.

Here is a selection of tried and tested dinner party games that have been successfully added to liven up the more reserved dinner party.

As the host of the dinner party begin by writing phrases or statements on pieces of paper or cards. Write anything you like but the more unusual the better. For example, ‘I was abducted by aliens’ or ‘have you ever run a marathon in a pirate costume?’When everybody arrives ask your guests to read the phrase or statement that is under their plate. Ensure that they do not read it aloud or show it to anyone.

Then, once everyone has memorised their phrase or statement explain that they have to try and slip it into a conversation without anyone realising. If a guest states their phrase and someone realises the guest who has caught that person out must tell the group and if they are correct the person is then out of the game. Guests who slip their statement into a conversation without the group realising are the winners of the game.

This is a simple, fast paced game that gets everyone involved and keeps the conversation moving. The host starts by calling out the name of a celebrity. The person to the left of the host must then name a celebrity whose name starts with the first letter of the surname of the previous celebrity. For example, the host calls out ‘Clint Eastwood’ the person to the left must then call out a celebrity name that begins with the letter ‘E’, such as ‘Elijah Wood'.

The game then carries on around the table. If a guest cannot think of a name or takes longer than thirty seconds to come up with a name the host 'punishes' them. To make the game even more interesting change the direction of the game when someone comes up with a name that begins with the same letter in the forename and surname, for example, ‘Doris Day’. This stifles the previous player and usually ends in punishment.

This is a great game that is perfect to play before or after the meal. Instruct one of your guests to leave the room for a minute. When the guest is out of the room the rest of the group should discuss and decide who they are going to be, for example, ‘Jack Nicholson’. Once you have chosen an identity for the absent guest ask them to come back into the room. Once they have sat down begin asking them questions that would relate to their new identity – in this case questions that you would ask Jack Nicholson – for example, ‘what was it like winning an Oscar?’ Once the guest has figured out his or her identity move onto the next guest.

Make sure that the games you include involve little effort and encourage your guests to interact and, more importantly, have fun.